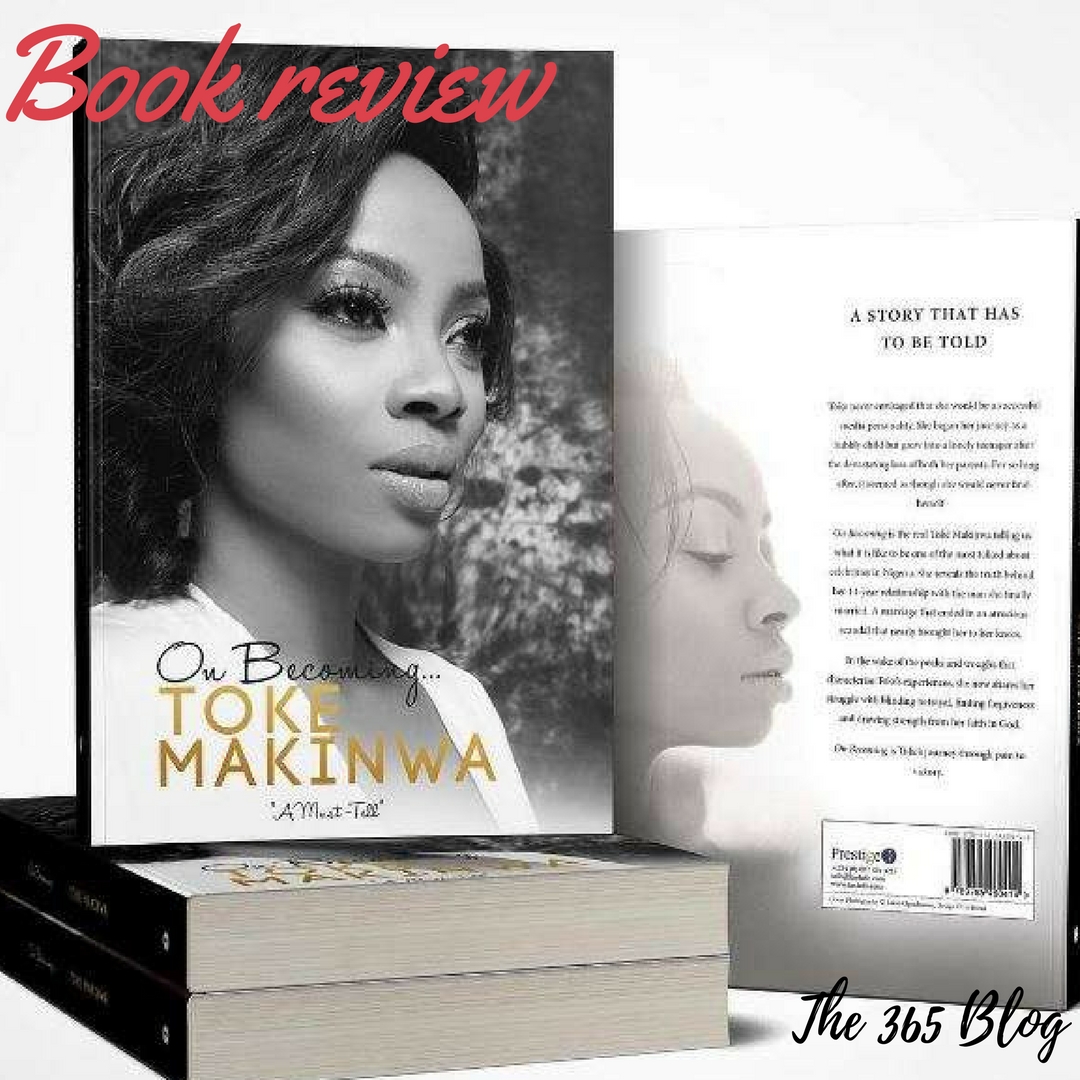 Disclaimer: This is my opinion and although some people may feel that I am not entitled to my opinion on Toke’s marriage, I am giving it anyway. So if you one of those ‘Some people’, either you read this and eat your critique or you should probably move to the next post. But feel free to make give your own opinion of the book in the comment section below.

She says it’s not a tell all but a must tell, I say it’s both.

I first discovered Toke Makinwa on YouTube, watching her weekly vlogs. I have since become aware of her presence in the entertainment industry and developed great admiration for her fashion sense (she kills it guys!). So naturally when I heard she wrote a book, I was both surprised and excited. When I found out the book was about her marriage, I was very curious.

On becoming, Toke Makinwa’s book, was released on Monday the 28th of November but I didn’t get around to purchasing it until Tuesday evening. On purchasing it for a sum of £4.99, I spent the next five hours reading it and I must say it was worth the read. Although the book was painted to be solely about the juice she provided on her marriage, it was so much. The underlying message of self discovery, a heart breaking loss, emotional abuse, perseverance, fear, the need for God and social stigma.

Toke tells the story of woman who was trapped in a cage, where she is surrounded by so many factors that keep her trapped. Fear is a big one of those factors. For toke fear came in different forms such as: the fear of loosing something which everyone thought was so perfect and so they envied it and something if fixed had great potential at making her happy, her relationship with Maje;  the fear of being another celebrity cliché case(the husband cheats after being married for a little over a year and then they get divorced); the fear of loosing something that in the 8 years and more that it had been, had come to define who she was; the fear of taking a decision which could potentially destroy what she had spent her life building – her career; and most for all the fear of starting over.

The second factor could have been the need to fill the void created by the devastating loss of her parents very early on in her life. This void is one that yearns for a sort of love that she was unable to receive from father due to his absence. Her love for Maje was the only thing that was able to fill this void and so she turns a blind eye to all her get out of jail (the relationship with Maje) free cards.

Another factor was society and its ability to stigmatize her if she got divorced. “What will people say?” Is a question I am sure crossed Toke’s mind several times and the negative answers she found within herself kept her jailed in her relationship with Maje. The final factor is one love, she loved Maje to a fault. I am sure if she wanted to leave at the earlier stage of their relationship, she would have been trapped because she loved him.

Some say that because this is only Toke’s point of view and there are many sides to a story, we should not judge Maje. I do not care if there are a million sides to a story, assuming all Toke said was the truth, no one deserves to be treated that way. Maje repeatedly trampled on her and her love. I am surprised she still had any love to give to him at the time they got married.

Still assuming all she said about the love triangle between herself, Maje and Anita were true, whoever coined the term ‘Yoruba demon’ must have been trying to describe the Maje from Toke’s POV. People are blaming Toke for the end of her marriage, but the only thing I blame her for was getting married to him in the first place, not ending the marriage sooner and  giving Maje another chance after she found out about Anita and her baby.

My favorite chapters were the last two; let go and let God, and healing. Those two chapters really touched me and I believe they touched other people out there. It caused a shift in my overall perception of challenges and God’s plan for us. The moral is the story is; wait on God for his direction and every challenge you face in life prepares you for the place where God has prepared for you. As Travis Greene said “God is an intentional God”, never forget that he has a plan for you.

The only critique I have for the book is that it could have been less juicy. There were so many things that did not need to be said. We live in a society where the truth is hard and the whole truth is even harder. As such when we have the whole truth, we wait for the teller of the truth to make a mistake so we can point accusing fingers at them.

Lets us give it to Toke, she really did turn lemons into lemonade with her book because not only did she make money from the sale of her book, she also touched lives. Toke, you go girl!

One Reply to “A book review: Toke Makinwa’s On Becoming”

BOOK OF THE WEEK

Title - I do not come to you by chance. Author - Adaobi Tricia Nwaubani. Quick review - Dear readers, this book does not come to you by chance. It contains some of the funniest 419 (scam) messages I ever. With interesting characters like Cash daddy, the man who poops in front of just about anybody , and Kingsley, the crooner of the best love and 419 letters, this book will leave you showing your 32. It is available on Amazon books. Enjoy!

Oil on Water by Helon Habila.

Against the run of play by
Olusegun Adeniyi.

A personal opinion on everything designed and beautiful.

Catering for the poor ones deprived of education more especially the little ones😔.

Musings and books from a grunty overthinker

Tales of humour, whimsy and courgettes

Scroll for a good read